After studying 3 years at Beaux Arts School in Valenciennes then in Cambrai, Atomic naturally moved  towards the practice of painting. Using various mixed acrylic techniques, he specializes in the use of  aerosol and airbrush.

Atomic discovered Graffiti at the end of the 90s in his most representative practice: the work of the  letter. Very quickly, he specializes in the representation of characters in a style that is his own.  Influenced by comics, traditional animation, science fiction and with an experience in character  design, his trait is both graphic and aggressive.

With a graffiti experience, he decided since 2008 to specialize in customizing objects he recovers.  Very quickly he moves towards the skateboard which seems to be an ideal support for his painting  practice.

Today he specializes in customizing sneakers of which he is a great amateur and small collector.

As a member of the VMS group, he works as a team to create murals highlighting the practice of  Graffiti; his fellows working on letters, Atomic drawing characters, scenes and sets.

Member of the Collectif Renart, he discovers street art and promotes this practice to make it  accessible to the general public and make the bridge between Graffiti, art and institution. 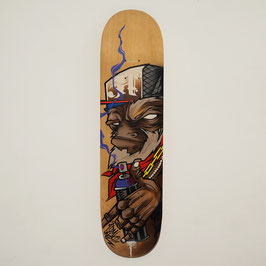 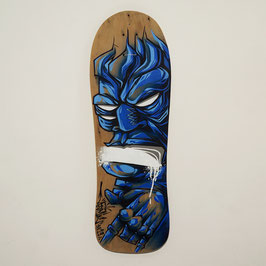