Born in 1995 in PARIS, Caphar is a French artist who discovered painting at the age of 22 when  attending a BEBAR live painting performance.

Without any artistic background he bought his first set of brushes the following day and started  re-painting his whole apartment. The same year he became a web editor for URBAN ART PARIS  and got invited to paint several mural for different events in France.

The following year, in order to keep pursuing his passion he flew to Mexico where it was more  affordable as a young artist and joined his first street art collective : Colectivo Tlatoa with whom  he got involved in a few painting projects throughout Mexico.

He them got his first solo show : « ROUND OUT THE ANGLES » at the Lavamp Store in colab with  ARCA MX where he exhibited 10 pieces of his first graphic / urban phase.

He then challenged himself to cross Central America without any savings painting murals in  exchange for food and accomodation. This trip led him to paint about 10 murals in Mexico,  Guatemala, Nicaragua and Colombia during 10 months.

CAPHAR’s aesthetic is highly influenced by traditional painting and technique while he attempts  to deliver it in a more graphic and modern way such as artists like Gustavo Rimada, Michael  Reeder or Telmomiel.

The use of hands representing mankind and natural elements such as animals or plants is there  to represent the sometime agressive relationship they have together.

In 2020 he finally came back to France and moved to Nantes where he works on maturing his  style and exploring other mediums such as digital, collage and motion design. 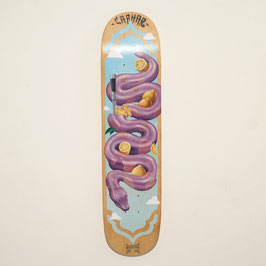 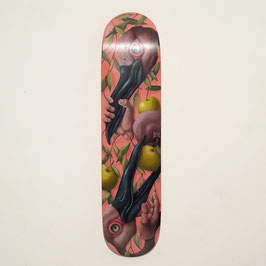