“The traveller is a continual source of perplexity. His place is everywhere and nowhere. He lives on stolen moments, on reflections, on small presents, on bargains and crumbs. Here are these crumbs...”. Nicolas Bouvier -The Japanese Chronicles.

Most of Maxime's drawings are engraved moments. For him, they represent all the time he spent on foot, scooter, boat, bus, looking at and deciphering the landscapes he observed throughout his travels, mostly in Asia. He has been skating for over 15 years but he discovered a new connection with the skateboard when he started to draw on skate decks to report his six months trip to South East Asia in 2018. The value of a skateboarder is not only measured by his technique but more importantly by the fluidity and ease of his movements. This what he also looks for when he draws. Although he sometimes looks at photos of his trip, his drawings are composed as he draws, by feeling. They often break free from the rules of perspective, he tries to make them harmonious and smooth. 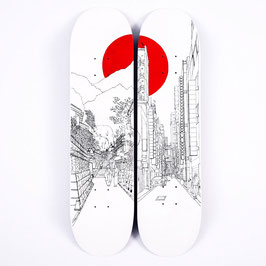 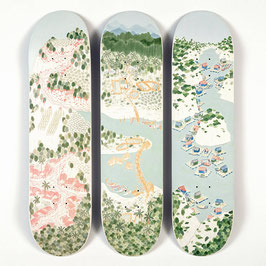