Sébastien Siegwarth aka Esboner is an artist from Metz in the East of France. Born in 77, he has been drawing since childhood. His inspirations are on the one hand the traditional Japanese universe, the culture of detail and the line, and on the other the American school of social caricature and the exaggeration of the personality traits of society. Arrived by chance in the graffiti world at the end of the 90s, this art form will then change the way he draws. He will orient his work in the urban space, show his art and his reflections to all, without the intermediary of galleries. Board customization also arrived early with this artist, first as an amateur when he was skating younger, then professionally as a streetart artist. This is part of an ethical recycling process; from objects that no longer have their primary function. The skateboard is then worked as an object of art and enhanced with its history, the colored patch on each board shows the place where the board broke. Esboner works on the expression of universal feelings, doubt, nostalgia, melancholy or even revolt, all of the paradoxes of the human being. He also works on many supports, exploiting curves, angles as at his beginnings in graffiti. "It is the support that brings me the drawing, it is by observing it that ideas grow". His work is visible in the streets of Metz, Paris and some European cities. He exhibits in galleries, and sells his works on various supports from his workshop in Metz. 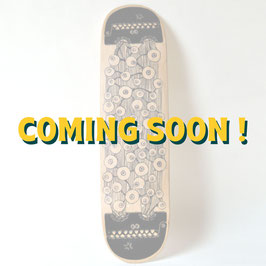